When you’re at your wit’s end trying to get a kid to try a new vegetable, you resort to the Trojan Horse method: hiding the offending food in other dishes. The logic goes as such: you love Little One, Little One hates healthy food, but you’ll be darned if Little One isn’t eating healthy, whether they know it or not. 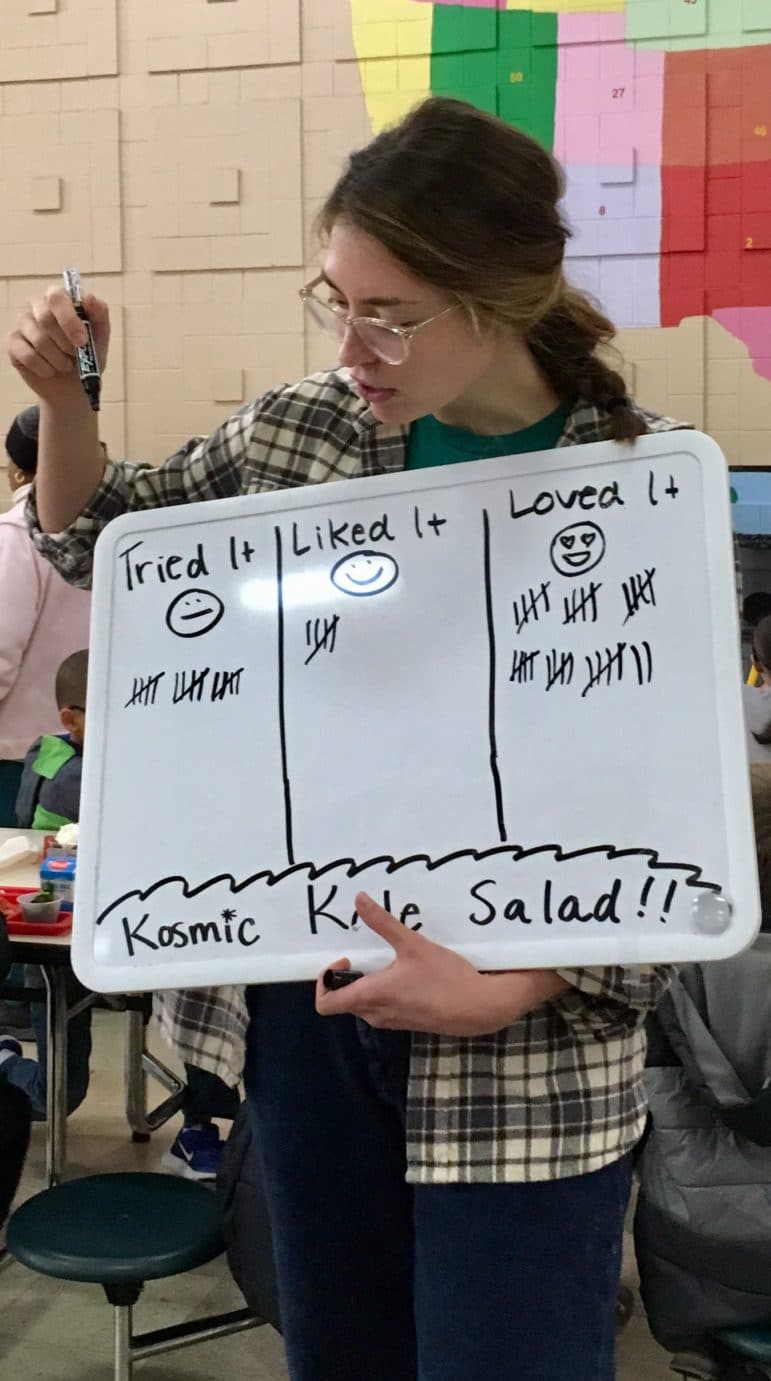 When you’re at your wits’ end trying to get a kid to taste a new vegetable, you resort to the Trojan Horse method: hiding the offending food in other dishes. The logic goes as such: you love Little One, Little One hates healthy food, but you’ll be darned if Little One isn’t eating healthy, whether they know it or not. Thanks to generational wisdom (and Pinterest), we all know a million different ways to hide a whole range of veggies from picky eaters. My mom was no stranger to pureeing eggplant into my lasagna. I, too, once took secret joy in sneaking beans into meals cooked for a legume-hating but fiber-poor ex boyfriend. From butternut squash stirred into mac and cheese to meatballs packed with tiny mushroom chunks, invisible veggies just go down easier with those who can’t even look at a cauliflower floret without gagging. This includes many of my students, who won’t hesitate to proclaim that the turnip greens I’ve just harvested and lovingly prepared for them look “absolutely disgusting. YEEUUCHHH”

Part of my job as a FoodCorps service member is to encourage these pint-sized naysayers to try healthy foods in a fun and controlled environment so that they’ll actually eat the vegetables on their school lunch tray instead of throwing them away. I do this by conducting taste tests of locally-sourced produce on a monthly basis with my co-service member, Kelly. My goal when selecting a taste test recipe is to ensure the veggie appears prominently in the dish, so the kids can recognize it and eat it when it resurfaces in future meals. This is especially important when the vegetable is brand new to them; whereas nearly every kid knows what carrots look like before they’re mashed up into a souffle, fewer have encountered an intact beet or radish. Admittedly, it’s hard to reconcile this vision with veggies so brazenly healthy that they scare kids away on sight. Is it a coincidence that the veggies with the worst reputations for flavor tend to be dark green? Broccoli, collards, and green beans each incited horror among my sisters and I at our childhood family dinners. Those scary green mounds were the visual embodiments of sheer, unadulterated nutrition! There was no way stuff that looked like that would taste good! 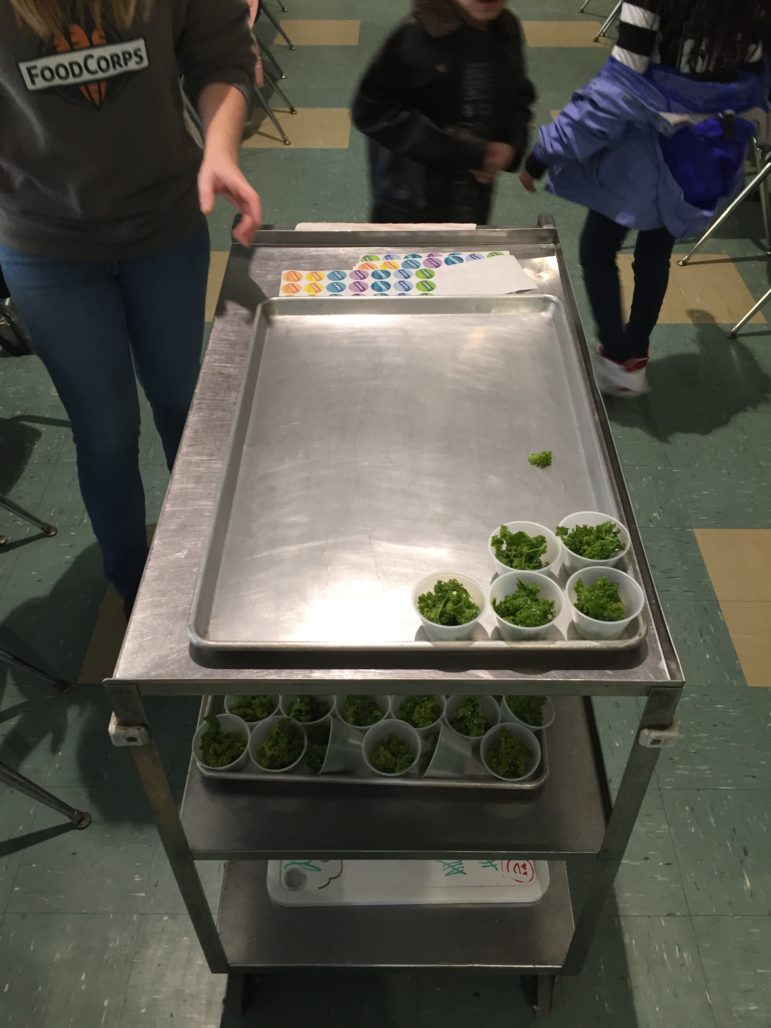 So, with kale on the docket for November’s Harvest of the Month taste test, Kelly and I considered our options: mask the leafy green threat in fruity smoothies? Blend up some kale hummus? Try kale pesto pasta? Each of these recipes would render the original kale leaves unidentifiable, but we guessed that with its big, fluffy leaves and deep green hue, it’d be a tough sell if left raw.

But kids can surprise us. Before the monthly sampling kicked off, I had tested a kale salad recipe with some of my Stefanik Elementary students. Each kid picked their own leaf from the beautiful purple kale plants growing in the school garden. They watched, some eagerly, some with heavy skepticism, as I tossed the leaves in orange juice vinaigrette and passed them out like leafy popsicles. Overwhelmingly, the students told me they loved it and picked their stems clean. Armed with those positive preliminary reviews, Kelly and I decided to buck kid-friendly kitchen logic and serve raw kale salad to everyone. 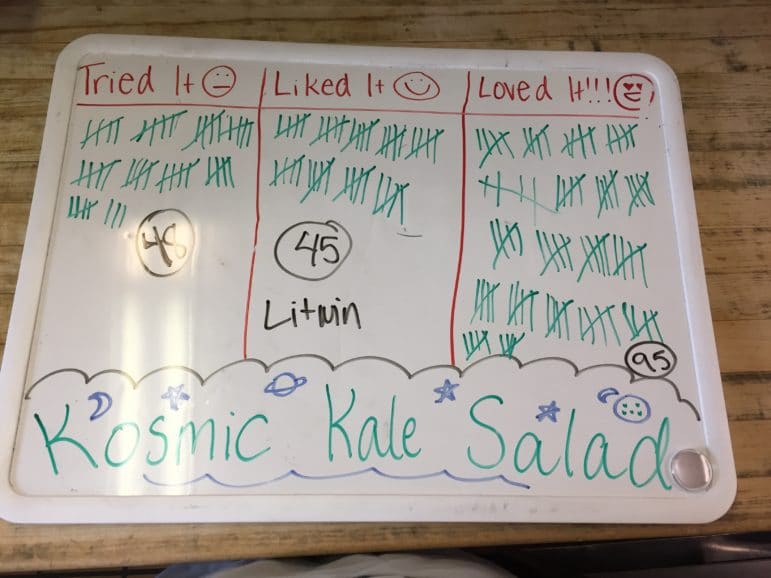 This salad had no frills beyond its sweet and tangy dressing–no croutons to distract from all those frighteningly fresh greens, nor Craisins to incentivize both chewing and swallowing. Right before our kickoff taste test at Bowe Elementary, I got cold feet, panicking that the Stefanik kids were only jazzed about eating raw kale because they’d picked it themselves. To my shock and delight, a majority of the Bowe students who tried the salad voted that they’d either liked it or loved it! We went on to tally a 69% positive response on average at Lambert-Lavoie, Stefanik, and Litwin during subsequent taste tests. I loved the kale taste test because it proved that, while having your kid help prepare their own healthy food (picking kale, dressing a salad, stirring a pot, whatever) is a sure-fire way to get them to taste it, kids won’t always balk at a food based on looks alone. It helps that Kelly and I bring lots of energy to these events and reward brave tasters with stickers. But at the end of the day, kids will face their ultimate food foes on their own and decide they aren’t so disgusting after all. Now hopefully, when they see kale again in their school lunch, they won’t be afraid to dig in.​