Give the power and joy of food this Giving Tuesday!

From Shutdown to SNAP: Our 2019 Policy Year in Review

The past year brought some big changes to food policy and programs. Here are a few food policy highlights from 2019 — and a look at what’s coming next year.

As 2019 draws to a close, we are taking the opportunity to share a recap of our policy work over the year and looking ahead to what may come in 2020.

The results of the 2018 Congressional elections brought changes to Capitol Hill in 2019, with Democrats taking control of the House of Representatives and Republicans maintaining control in the Senate. But this new Congress landed in D.C. in the midst of what would become the longest federal government shutdown in history. As a result, approximately 800,000 federal workers went without pay for more than a month, and many of them struggled to put food on the table.

Fortunately, Congress and the president reached an agreement to reopen the government before the worst impacts on food and nutrition programs began. And the spending bills that passed for 2019 actually delivered a few food policy wins with funding for hands-on food education in schools, farm to school, and school kitchen infrastructure.

Consistent with his previous budgets, President Trump again released a draconian budget proposal for 2020 that called for eliminating AmeriCorps (again) and proposed deep cuts to school meals and food assistance (again). Fortunately, we anticipate that Congress will reject these cuts on a bipartisan basis (again).

Child nutrition on the table? 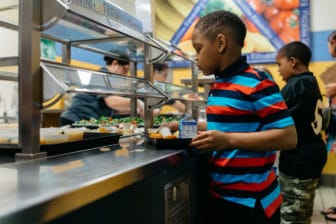 Many of the federal nutrition programs that serve children, such as school lunch and breakfast, after-school meals, summer meals, WIC, and more, are updated on a periodic basis by Congress in a process called child nutrition reauthorization, or CNR. As we describe in more detail in this blog post from earlier in the year, CNR represents a great opportunity for advocates to call for changes to improve these programs, and it was last done in 2010.

In the first half of the year, both the House Education and Labor Committee and the Senate Agriculture Committee held hearings to discuss and debate issues related to these programs. And over the course of the year, a number of bills have been introduced that would help improve school meals. The goal for these bills, often called “marker bills,” is that they get incorporated into a larger, more comprehensive bill that results from the CNR process, rather than getting passed individually.

With our partners at the National Farm to School Network, FoodCorps is advocating for the Farm to School Act of 2019, which expands and improves the USDA farm to school grant program, and the Kids Eat Local Act, which would make it easier for schools to source local products. We’ve also been advocating for the School Food Modernization Act, which would help schools update their kitchen infrastructure in order to prepare and serve fresher, more appealing, and more delicious meals.

Congress could still take up CNR in 2020, and we will keep you posted for opportunities to raise your voice in support of these bills.

Unfortunately, over this year, we’ve also seen a number of attacks by the Trump administration on food assistance and other programs that are vital supports to the communities we serve. In particular, we opposed the Trump administration’s “public charge” rule that would limit immigrants’ access to vital health, food, and housing assistance, and we asked our network to submit comments in opposition to this rule. The administration released their final public charge rule in August with a number of problematic provisions, but legal challenges have halted the implementation of the rule.

This summer, the Trump administration also proposed a rule that would limit SNAP benefits for millions of Americans and jeopardize access to free school meals for almost a million children. We strongly opposed this proposal and asked our network to speak out against the rule, resulting in more than 300 comments submitted to the administration. The comment period for this rule closed in November and we anticipate the administration releasing its final rule next year.

Looking forward, 2020 is likely to be a tumultuous year with a presidential election, continued impeachment inquiries, and an unclear government funding picture. Despite the headlines that come out of Washington on a constant basis, day-to-day work on the issues we care about will continue, and we will keep you updated with the latest news and opportunities to raise your voice.

What could those opportunities be? For one, it is still possible for Congress to continue progress on CNR and we will need to be poised to act if the opportunity arises. We also anticipate more actions by the USDA, like changes to school meal programs or SNAP, that we may need to respond to. And outside of D.C., we are monitoring policy developments in the states we serve and continuing to work with partner organizations and advocates like you to advance policies that help connect kids to healthy food.