Blindfolded, they were surrounded. With sight gone, their 4 other senses were heightened, as they carefully and silently ate what I put on their plates. Round 1, one veggie… Round 2, another. Contestants thought: I’ve tasted this before, what can it be?! I think maybe corn? I reported, “Incorrect, it was a beet.” Round 3, something … Continued

Blindfolded, they were surrounded. With sight gone, their 4 other senses were heightened, as they carefully and silently ate what I put on their plates. Round 1, one veggie… Round 2, another. Contestants thought: I’ve tasted this before, what can it be?! I think maybe corn? I reported, “Incorrect, it was a beet.” Round 3, something crunchy. This is definitely a bell pepper! “Correct!” It continued for another 3 rounds until the final bonus round. What?! She said it’s from the garden?? But there are only plants growing there, no food! It’s weird and tastes kind of minty… Surprise, surprise! “It’s a small peppermint leaf from the herb section of the garden! (Herbs still count as foods)” 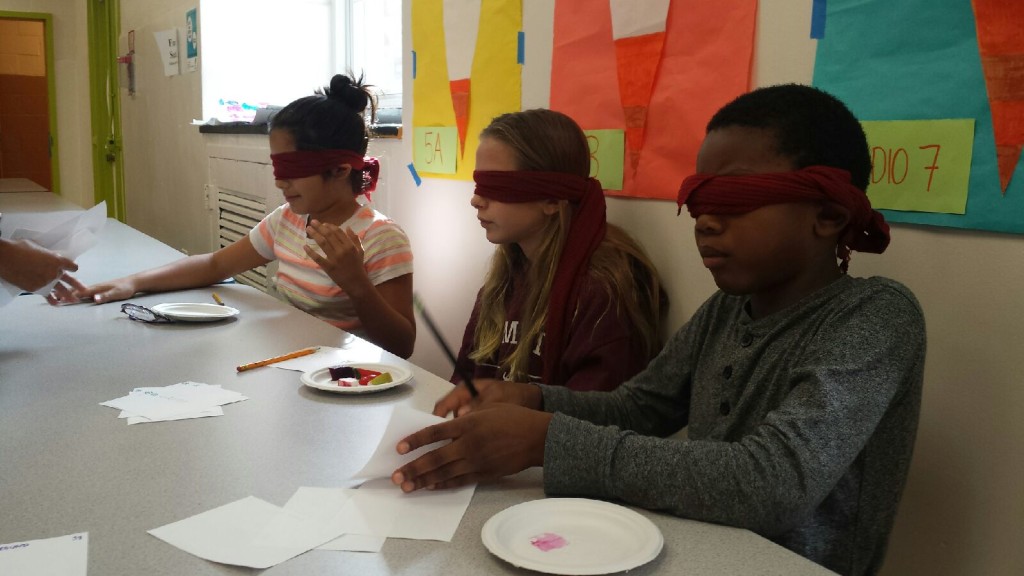 Their classmates sat nervously as the final points were calculated. The new class scores in the 9-week long veggie competition were about to be announced based on the results of this week’s challenge: a blindfolded taste test. These three students were the chosen ones, selected by each of their classes on the basis of well they knew the veggies in the salad bar. After a long wait, I was ready to announce the winner. “As all you 5th graders know, 5B and Studio 7 have been neck and neck for the past 3 weeks of this veggie competition. 5A has been behind. But after the results of today’s challenge, I’m happy to report that we have a new leader and that is 5A!!!” 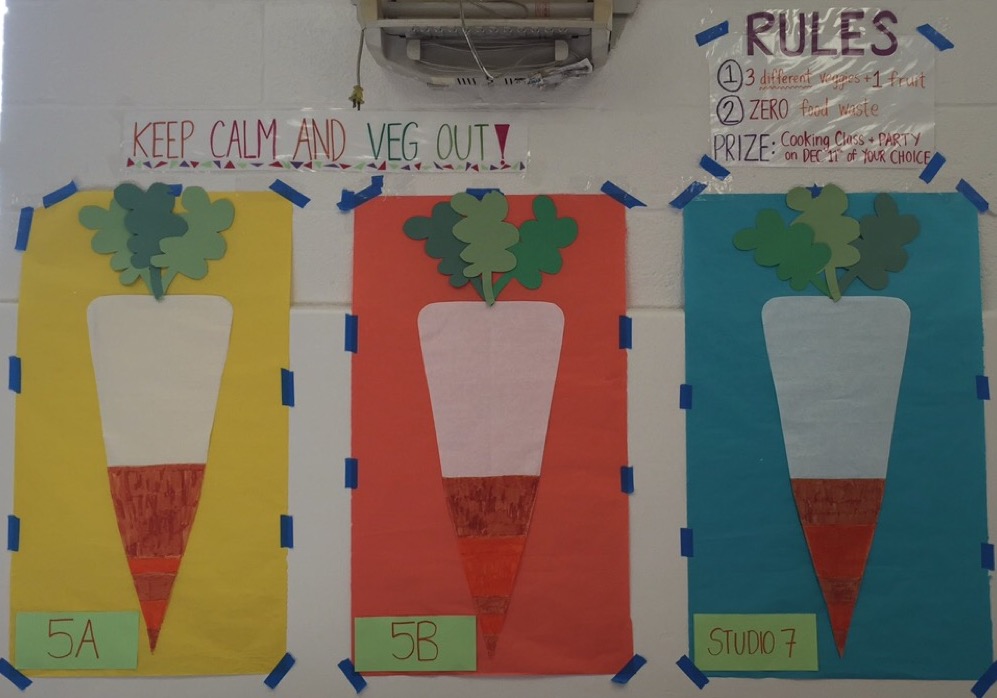 I cannot believe how well the 5th grade veggie eating competition has been going. I was initially inspired to work with this particular group in the lunchroom because during my first month of service, I noticed that the 5th graders were consuming the least amount from the salad bar. Understanding how important this stage in their lives is in influencing their future eating habits, I was determined to improve their salad bar consumption.

Before I started this competition, I roughly estimated that about 12% (5 out of 42) of the 5th grade students actually ate the vegetables in the salad bar. Those who did get food from the salad bar exclusively ate the fruit. Slices of oranges, apples, pears and bananas, were nutritious, but added more sugar to their diet than they needed. What they needed was an attitude change about how they perceived the salad bar. With 5th grade especially, social hierarchies start to form and if one student chooses to say “Ew!” and puts a hand up in disgust of the salad bar, then 8 other students will mimic that behavior as well.

Passionate about making the salad bar the “coolest” choice to make during lunch, I designed a 9-week competition to break those social barriers preventing some from feeling comfortable eating from the salad bar. With the concept of 3 veggies, 1 fruit, and 0 food waste as the rule, entire class participation and support as the guiding force, and the chance to win a cooking class of their choice as the motivation, I hoped to achieve this goal.

The first few weeks, I heard complaints of how unappetizing the salad bar looked sometimes. To be fair, by the time 5th grade lunch rolls around, about 250 other students have already gone through it. Even I, an avid salad enthusiast, would not be enticed by it by the end of the day. So I worked with lunch staff to ensure that the salad bar looked tidy and that there would still be some goodies like cheese and sunflower seeds left. An attractive salad bar can inspire beautiful salad combinations. 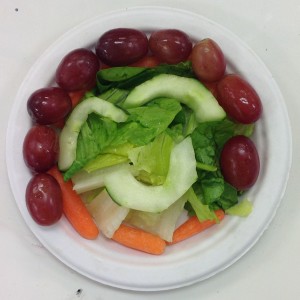 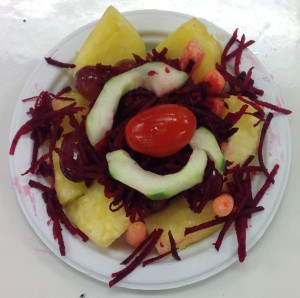 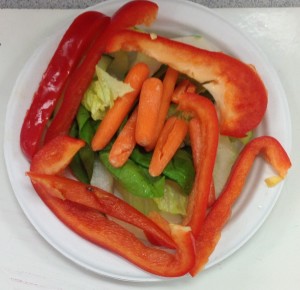 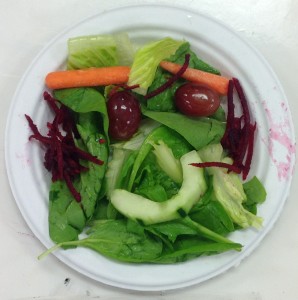 Now 5 weeks in, I’m thrilled to report that I have already seen a dramatic difference in the 5th graders consumption patterns. Even on days when I do not come into the lunchroom to tally their scores, I hear reports from lunch staff that the majority of students continue to eat their 3 veggies and 1 fruit from the salad bar. Days where I do come in to tally scores, I calculate an average of 75% participation, a significant jump from 12% just 5 weeks ago. Recognizing that for some students, school lunches and salad bars are their only source of fresh fruits and vegetables in a day, I see the positive value this competition has on their daily nutritional intake.

Hearing one of my students who initially was not participating convincing his peers that beets are really good and taste just like corn was exactly the positive peer encouragement I hoped to see. (Even if it’s weird to think that beets taste like corn.) Slowly but surely, I am starting to feel confident in the power of changing youth attitudes about vegetables. Only 4 more weeks to go!

Food Advocacy at the White House: Your May Policy Updates