To further our commitment to equity, FoodCorps recently promoted Tiffany McClain into a brand-new role: Director of Organizational Equity and Inclusion. We spoke with her about how she sees herself implementing FoodCorps’ equity, diversity, and inclusion priorities.

In pursuing our vision of connecting all children to healthy food, FoodCorps embraces equity, diversity, and inclusion as strategic and moral imperatives in our work. To further this commitment, FoodCorps recently promoted Tiffany McClain into a brand-new role: Director of Organizational Equity and Inclusion. We spoke with her about how she sees herself implementing FoodCorps’ equity, diversity, and inclusion priorities. 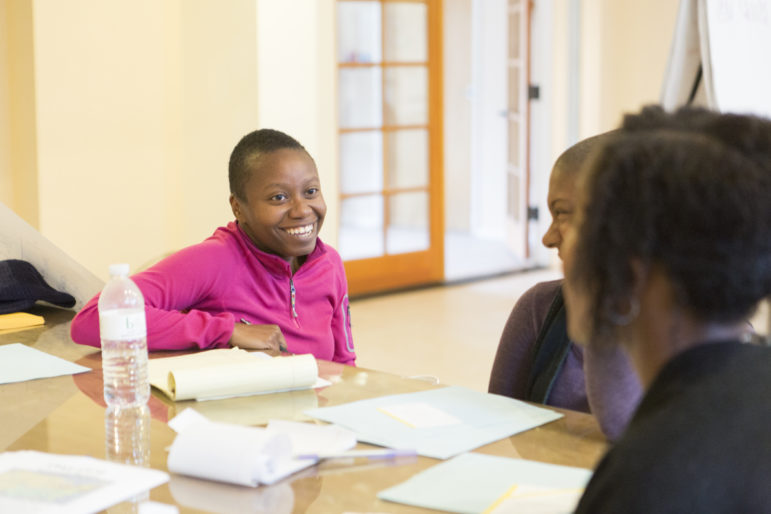 What brought you to FoodCorps?

I was attracted to FoodCorps because it was such a young organization. I joined the staff in 2013 in the middle of the second year of programming. Before then I had worked for organizations that were much further along in their lifespans—many, many decades older than FoodCorps. And while it was great to be part of organizations that had such inspiring histories and legacies to draw on for inspiration, I was excited by the opportunity to work for FoodCorps because it was still possible to create something new, to help determine what kind of organization FoodCorps would become, and to do work that would have an impact on its future.

Talk about why you decided to take on this new role. Why is it important for you to focus on equity and inclusion?

I don’t think there’s been a year at FoodCorps where I wasn’t focused on equity and inclusion in one way or the other. As the Recruitment Manager for our AmeriCorps program, I spent much of my time working on increasing the diversity of the service corps. I co-chaired our diversity and inclusion staff working group, I organized a series of retreats for our alumni of color and a pre-orientation gathering for incoming service members of color—all when I was still wearing the hat of Recruitment Manager. So I don’t really see taking this new role as a complete pivot. I see it as a recognition that both our actual mission and our efforts to diversify will always be hindered if we don’t integrate a culturally responsive and equity lens into how we do our work, how we make decisions, how we talk about our work, and how we make people feel in the doing of the work. Our ability to diversify the people in the rooms in which we operate will always be stunted if that recruitment doesn’t have a solid foundation to stand on.

That said, I originally had mixed feelings about taking on this role because 1) I know I don’t have all the answers and 2) I strongly believe that integrating an equity and inclusion lens into our work is a responsibility that should be collectively owned. Everyone on our staff and board has a role to play. I still believe that. But I also realized that if there wasn’t someone on staff whose responsibility it was to keep our collective eye on the ball, we probably weren’t going to make much progress. Because too often in the process of going about our day-to-day work, other demands tend to take priority over our need to pause and consider how our pace or decision might get in the way of doing equitable work and showing up as the social justice organization we want to be. But with this role, I don’t have many other demands. It’s the main priority. That doesn’t mean it’s going to be easy from here on out, but I think it was a necessary move to make for this moment.

I strongly believe that integrating an equity and inclusion lens into our work is a responsibility that should be collectively owned. Everyone on our staff and board has a role to play

What do you hope to do in your new role, and how do you plan to do it? What are you the most excited about working on?

In general terms, I will say that given that this is a new role, I decided to spend the first year attending to issues and opportunities that—if not addressed immediately—will set us back considerably next year or things that have been on the backburner for far too long. Some of those issues include addressing some of the financial barriers to service so that we can continue to build a more inclusive service corps, making sure that our staff are on the same page when it comes to understanding what equity and inclusion mean in the FoodCorps context, and—probably the toughest one—identifying and implementing a system of checkpoints, whether in staff hiring or decision-making process, that force us to pause and look at what we’re doing from an equity lens.

In planning for the long-term, I will also be conducting a series of one-on-ones with FoodCorps stakeholders—staff, board members, service members, alums, site supervisors—to better understand how we are showing up in the world, what the patterns are, what needs fixing, and what our priorities should be. Like I said, I don’t have all the answers, and I have been steeped in FoodCorps culture for over four years. I have my own privileges and blind spots. So I want to talk to people to help inform a 2-5 year plan to help us make some real, sustainable progress that is not just meaningful to staff, but meaningful to all the people we interact with or who are impacted by our decisions.