Upon my second meeting with our High School ROTC class we made Rainbow Smoothies.  An exciting way to emphasize the importance of getting a variety of benefits from our foods by increasing the variety of foods we eat.  Each rainbow smoothie (or salad, or kabob, or stir-fry, etc.!) contains at least one fruit or vegetable … Continued 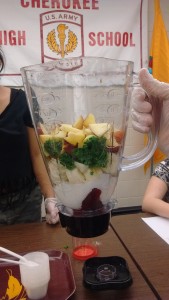 Upon my second meeting with our High School ROTC class we made Rainbow Smoothies.  An exciting way to emphasize the importance of getting a variety of benefits from our foods by increasing the variety of foods we eat.  Each rainbow smoothie (or salad, or kabob, or stir-fry, etc.!) contains at least one fruit or vegetable from the ROY-G-BIV of the rainbow, and is a great way to get all those benefits in one place!  A generally fun and edible hit for most anyone who likes to eat.

During the third class of that day with ROTC, one of the students commented from the back of the class, “that looks like some of those really expensive drinks people get.”

“You’re right,” I said, “smoothies can be really expensive.”  What I was thinking about though, was all the times during a cooking demo, or tasting when a student would ask, sometimes hesitantly, how much something was, or point out that they didn’t have a blender, or certain tool at home.  Fourth graders wearily concerned about the cost of food, is real.  The undeniable actuality that the image of ‘healthy’ food in popular media often doesn’t reflect the students we serve with, or the communities who lack adequate, affordable access to it, is also real.

That student’s comment was a reflection of this image of who gets to have ‘healthy’ food.  But it was also a reflection of the reality that fresh, unprocessed foods are often out of reach, both geographically and economically, for a great many people.

I try to respect these factors in my service, because they aren’t statistics or vague concepts, they are the lived experiences of the community I serve.  I also believe that by growing and knowing our food in a personal, hands-on way, we can create solutions to these areas of lack in ways that empower our students, and by extension their families’, and communities to redraw those images of what healthy food is, and make it their own. 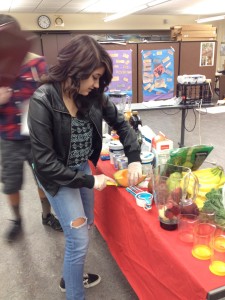 All of this is why I proceeded to then mention to that student, and the class that day, that most all the foods that were going into our smoothie actually grow around here, and many of them here on the school campus.  All we need do is harvest them when they’re ripe, and freeze them for year round enjoyment!  In this same vein, I make an effort to procure any ingredients we can’t get from our garden or a local farmer, from the local grocery in town.  I want them to know that this is available to them.  And if ever we do make smoothies, I always like to mention that you don’t need a blender for a ‘deconstructed smoothie,’ a bowl of yogurt with fruits on top is just as yummy!

In a month or so, when it warms up a bit, I’ll start bringing the ROTC class to the garden and green house.  It’s a chance for them to see and feel, first hand, that ‘healthy food’ is for them, and it is what they make it.  In the mean time, they’ve been making their own rainbow smoothies, creating their own recipes, and forming their own visions of what healthy food looks like. 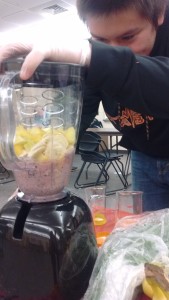