Farm to School in Native Communities: A New Name for an Ancient Practice

In honor of National Farm to School Month, we are taking a close look at the work of our service members serving in Native Communities. We have service members in the Navajo, Tohono O’odham, and Apache tribes.   Prior to the existence of schools, indigenous elders educated their youth about agricultural practices and food. From … Continued

In honor of National Farm to School Month, we are taking a close look at the work of our service members serving in Native Communities. We have service members in the Navajo, Tohono O’odham, and Apache tribes.

Prior to the existence of schools, indigenous elders educated their youth about agricultural practices and food. From medicinal uses for plants, to preparation of traditional meals, food has been central to cultural teachings of America’s First Peoples. As the modern world encroaches on the traditions of Native people, what is now being called, “Farm to School,” has become a means for the reclamation of Native American identity in Native communities. Educating Native youth about the sacred importance of food to their culture has become a weapon in the fight against the damaging impacts of the corporate food system disproportionally effecting Native Americans. There has never been a need to label the education of youth on the importance of food; this teaching was simply intrinsic to culture. However, as Native people seek to regain healthy, sustainable, sovereign communities, Farm to School is now a term that is becoming familiar to many. We invite our readers to explore what Farm to School means to the Native communities we serve.

I am fortunate enough to work with a tribal farm in Canyon Day, AZ on the White Mountain Apache Reservation called “Ndee Bikiyaa” in Apache and “The People’s Farm” in English.  The farm was created as a way to revitalize White Mountain Apache health, culture, and agriculture from within the tribe.  Arguably, these initiatives of the farm are inseparable.   The creators recognized a very deep connection with nutritious, fresh, traditional food, culture, and how it affects a person’s health.  When locals support the farm, they are also supporting the tribe and keeping money on the reserv 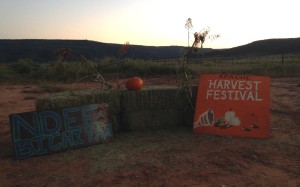 ation.  Every Friday, we sell produce at the farmers’ market in town.  Another initiative of the farm is education and outreach: talking to people about where their food comes from, and teaching about how you can grow it yourself. This is where I come in.  My efforts are focused on connecting the kids to the farm and to fresh nutritious food that can help prevent chronic diseases and encourage a sense of ownership over what they eat, especially traditional foods.

The Apache Harvest Festival is an annual event held at the farm that celebrates Apache food traditions.  My fellow FoodCorps service member, Maya, and I organized an activity for the kids at the festival.  Because corn is such an important crop for many Apache people historically and today, we created a fun and educational option for youth around corn.  Popcorn!  Popcorn is believed to be the first use of corn and many Native tribes have traditions that involve popcorn.  If popped yourself and not in a microwavable bag that contains extra processed fats and calories, popcorn can be an incredibly nutritious and delicious snack food. 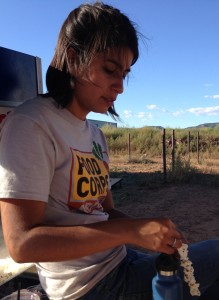 The kids made popcorn necklaces with options for dried fruit and/or pretzels to accent them. Along with the necklaces, we offered information on how popcorn is an indigenous food and recipes to take home.  We proudly watched kids walk around the festival while wearing their handmade portable snacks and later realized that we never heard a complaint about the popcorn not having any added butter or salt.  This was one amazing way I have been able to interact with youth in the community through the farm and I look forward to other similar experiences throughout this year.

At the Tuba City Feast for the Future Program, we teach Edible School Garden classes to 3rd – 5th graders covering topics on gardening and nutrition. Many classes include the teachings of elders and are taught within the context of Navajo culture. We also coordinate a community farming effort with seven Navajo and Hopi families. As a FoodCorps Service member, I found bringing local food into the cafeteria of the Tuba City Primary School to be my greatest challenge. The farming culture in Tuba City and on the Navajo Reservation is different than those of the communities that I had seen develop successful Farm to School programs. There is not a bustling farmers’ market to network with farmers. Local farms do not have websites to peruse and place orders. Farmers do not place bids for procurement contracts with school food service companies. However, many local families were farmers of traditional crops or ranchers of sheep. 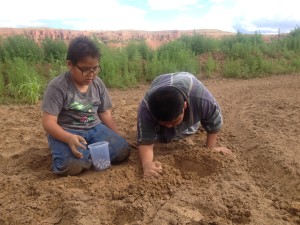 I initially felt frustration for my inability to find a viable farm to source the cafeteria. I soon learned that local farmers do not sell their crops because they did not view the land as something to profit off of. Rather, they grew crops to maintain their traditional lifestyles and shared their harvests with friends and families. Despite considering myself an environmentalist I realized that I, unlike the Native farmers, viewed farming as a profit-driven enterprise. This was an eye opening moment for me.

Following the National Farm to School Conference, I was re-motivated to give my students an educational, agricultural experience. I decided to devote a plot at the community farm my service site manages to education. At the plot, children ranging from pre-k to 6th grade planted native corn, melons, and beans using traditional tools under the guidance of a local elder and farmer. 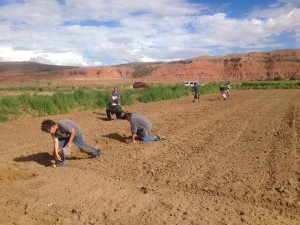 The elder taught the youth the role of corn in the Hopi creation story and the importance of preserving the corn seeds native to Tuba City. Standing in this field in the Painted Desert and watching the kids carefully drop the correct amount of seeds into the earth, I realized that this is what Farm to School in Native communities is all about.

As sovereign nations, Native tribes have the power of self-governance. Unfortunately, their ability to exercise their sovereign rights can be greatly limited by many factors, and one of the most important influences on the strength of tribal sovereignty is economic development. What keeps most tribes from fully practicing self-determination is their dependence on outside sources of jobs, money, and overall economic security. As money continues to leave tribal communities, many tribes are again starting to look within to regain some of the control that has been lost over centuries. Food, and especially traditional food, has proved a powerful way to do this.

For American Indians food is everything, from our nourishment to our medicine to our connection with our traditions, culture and homelands. 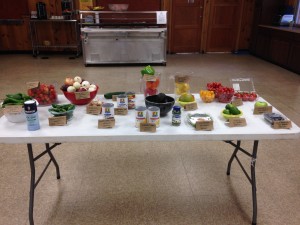 Many enterprising tribes and tribal entities are beginning to harness the power of traditional foods by creating businesses in which the foods are produced, harvested, processed, packaged, marketed, and sold from within their communities. This not only creates job skills among the people while keeping money within the tribe, but it also reinforces important traditional food knowledge that is in danger of being lost. Two inspiring examples of Native-owned and operated food businesses are Native Harvest, whose main product is mahnomin (wild rice), and Lakota Foods, which sells popcorn, a truly indigenous food.

At the Arrowhead Business Group (ABG) Camp this year, Emily (a fellow FoodCorps service member) and I created a cooking challenge to get middle and high school Native students thinking about how food can be a powerful economic tool for their community. ABG is a youth entrepreneurship curriculum program based on the Fort Apache Indian Reservation for Native youth whose purpose is “to promote social, occupational, and economic development and build resistance.” At their annual camp, we set up a Salsa Showdown Challenge, in which three competing teams had thirty minutes to make a unique salsa product, complete with a sales pitch that connected their product to their tribal community. Though salsa is little off the traditional American Indian food path, it is a simple, healthy recipe and a fun template for experimentation and creativity. We provided the bulk of the classic salsa ingredients (tomatoes, onions, jalapeños, garlic) from the local 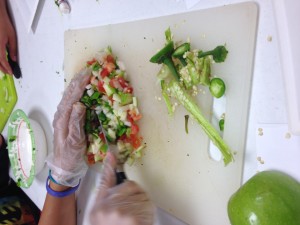 organic tribal farm located on the reservation, and supplemented with some not-so-classic ingredients (corn, bell peppers, mangoes, blueberries, cucumbers, etc.) from Safeway. Each ingredient was labeled with its name, where it was sourced from, and whether it was organic or non-organic, and students were encouraged to use those labels as part of their marketing strategies. In front of a (truly intimidating) panel of judges, consisting of a chef, a Native foods expert, a Native health and nutrition advocate and a business educator, students presented their salsa and its story, and were graded on the salsa’s taste, appearance, and creativity, as well as their sales pitch, appeal to the audience, and connection to Native communities. In their pitch, many teams emphasized that they used mostly local ingredients from the tribal farm, supporting the farm and their community. One praised their salsa for being a family heirloom, passed down from generation to generation with each generation updating and adding to it. My personal favorite was a team whose imaginary salsa business had little to do with sourcing locally but was named N.W.A., Natives with Attitude, and inserted their Native identities into their presentation as a real point of pride.

In the end, thirty minutes is not enough time to create a nuanced business plan while also making a salsa with blueberries that’s actually edible, but we hope that the challenge was an entertaining jumping-off point for these
students to start thinking about food’s connection to tribal business 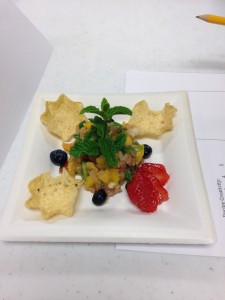 ventures. Even if just a silly salsa competition, this small challenge was a big introduction to using food as a means of strengthening economic independence, bolstering traditional food ways, and, ultimately, securing our Native communities’ futures.

Below is a link to a video featuring our service members Tyrone Thompson, serving the Navajo Nation, and Nacho Flores, serving the Tohono O’odham Nation. Please follow the link to hear their thoughts. 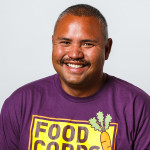 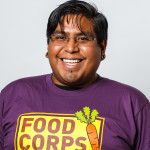