Yesterday, the USDA announced a relaxation of healthy school guidelines, slowing the timeline for schools to comply with certain regulations and loosening the standards for others. We are extremely disappointed to see yesterday’s action to relax science-based nutrition standards for school meals.

FoodCorps launched the following year, and has been on the front lines connecting kids to healthy food in schools as these guidelines have been implemented.

Yesterday, the USDA announced a relaxation of these guidelines, slowing the timeline for schools to comply with certain regulations and loosening the standards for others, ultimately allowing schools to serve measurably unhealthier food to students in our public schools.

At a time when one in three of our nation’s children are overweight or obese, and one in five young adults wouldn’t qualify for military service due to lack of physical fitness, FoodCorps believes these rollbacks are a mistake for our children and our country.

The USDA says it is lowering the bar in response to “years of feedback from students, schools, and food service experts.” In fact, in the five years since the standards have been implemented, research has demonstrated strong support and successful adoption of the healthier school lunches. Over 99% of schools are meeting important portions of the standards; 86% of voters support the guidelines; and students are eating more fruits, vegetables, and other healthy foods that help them reach their classrooms well-nourished and ready to learn.

For the last five years, FoodCorps has been in schools doing the daily work of supporting food service teams and fostering children’s healthy eating habits hand-in-hand with the nutrition guidelines. We’ve learned many important things along the way, including that building healthy habits doesn’t happen overnight, and that new foods shouldn’t appear on a lunch tray without a proper introduction through a taste test or a hands-on lesson. We agree with those who mourn food waste and vegetables that end up in the trash uneaten.

Where we disagree with critics is on the solution.

Programs like FoodCorps––that incorporate hands-on cooking and gardening lessons, and that steer students towards the healthiest choices in the cafeteria––help students not only get access to healthy food, but excited to eat it, too. As a recent study by Columbia University demonstrated, in schools with more of FoodCorps’ hands-on learning activities, children are eating three times as many fruits and vegetables. These foods don’t end up in the trash.

We are extremely disappointed to see yesterday’s action to relax science-based nutrition standards for school meals. We believe it’s essential for school meals to offer students a strong foundation for their learning, and to set them up for healthy, productive futures. Offering school meals that are higher in refined grains, higher in salt, and sweetened with more added sugars is not the answer to an obesity epidemic that already costs our nation’s economy $1.4 trillion a year.

“Our kids deserve the best,” says FoodCorps Policy Director Kumar Chandran. “FoodCorps works with dedicated school nutrition professionals every day to help give kids the healthiest meals possible. We know it isn’t easy, but with over 99 percent of schools meeting the standards, we also know it is possible. Rather than relaxing standards, we should continue to build on the progress that has been achieved and support schools to continue to make healthy changes.”

This is the work that FoodCorps does. In the last school year, FoodCorps conducted 2,039 taste tests, added 664 healthy recipes and ingredients to school menus, and reached 177,879 students with nutrition education. “From our front-row seat we know that changing a lunch line from French fries to fresh greens takes time, and getting kids excited to try new foods takes creativity,” said FoodCorps co-founder and CEO Curt Ellis. “But we owe it to our kids to give them a healthy start. We don’t water down academic standards because some schools have difficulty meeting them. Why should we do that with nutrition standards?” 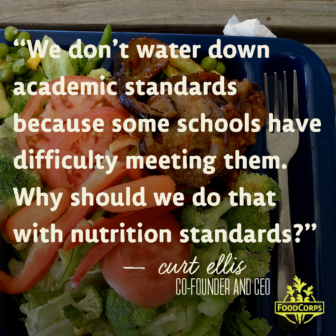 Schools Test New Lunch Dishes With Blunt Kids as Judges. ‘The Seasoning is, Um, Not the Best.’