A Place for Everyone (Even a Squash) at the Table

This fall, Polson Middle School garden students organized the third annual Garden Harvest Feast to celebrate a successful growing season and to share their garden bounty with the community. The feast was an incredible undertaking for students and staff; it took an entire year’s worth of planning, planting, and tending to the garden in order … Continued

This fall, Polson Middle School garden students organized the third annual Garden Harvest Feast to celebrate a successful growing season and to share their garden bounty with the community. The feast was an incredible undertaking for students and staff; it took an entire year’s worth of planning, planting, and tending to the garden in order to make it possible. In an effort to make the Polson Middle School Garden an inclusive, safe space that is integral to the school community, students have been involved at every step and have been able to push resilient, regionally-adapted seeds into the earth in the spring, care for them during the summer as they become robust plants, and then harvest and eat them in delicious meals in the fall.


The event showcased foods that are indigenous to North America and are culturally significant, such as corn, beans, and squash from the Three Sisters garden bed. Students from the Garden Exploratory Class and Family and Consumer Sciences Classes spent nine weeks harvesting produce and preparing it for the community to enjoy. Dishes included roasted root vegetables, garden herb lasagna, squash soup, pumpkin pie, fry bread, fresh tomatoes, mashed potatoes, dill pickles, kale salad, and more. There were also donations of wild game (including bison, elk, and deer) and Flathead Lake Trout, which was generously donated by the Tribal Fisheries Program of the Confederated Salish and Kootenai Tribes.

The food was blessed by a community elder who has been involved in the garden since it was created four years ago. He highlighted how much hard work went into the event and thanked students for sharing their bounty with everyone. Garden Exploratory Class students thanked the school for their support of garden-based education and even told personal stories of how they have been involved with the garden. 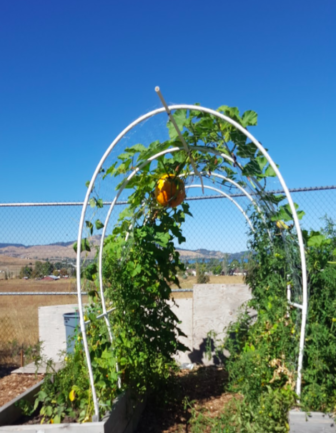 It was a spectacular event where students, families, farmers, teachers, and other community members connected over a delicious meal and celebrated the accomplishments of students. Perhaps one of the most important guests at the Garden Harvest Feast was the garden mascot, Hubbard the Squash. In the spring, students planted what they thought was a cucumber near a vining archway in the garden, only to realize that it was a giant cross-pollinated squash that was too heavy for the chicken wire that was wrapped around the archway. As Hubbard continued to grow bigger and bigger, so did the students’ concern for him. Finally, students decided to rescue him from the archway and continue caring for him in the classroom. He quickly became a beloved class mascot and the students couldn’t bear to serve him at the Garden Harvest Feast. After many heated class debates where they voiced their opinions about Hubbard’s fate (from “Being eaten is his life’s purpose!” to “He’s too special to us to eat!” or even “If we let him rot, we’ll be wasting his nutrients!”), it was finally decided that Hubbard would get to live through the feast and then would be eaten as a celebratory pie after all of their hard work was over and the community was fed.  Hubbard was the guest of honor at the feast and his picture even made it in the local newspaper!

While the squash mascot serves as a comical anecdote, the emotional connection to Hubbard also speaks volumes to the deep reverence that Polson’s garden students have for the things that they help grow. Seeing teenagers put so much energy into growing, harvesting, and preparing food for their community was incredibly moving because they cared so deeply about their plants and still chose to share their bounty with others.

To commemorate the end of the harvest season and their successful event, Garden Exploratory Class was fortunate enough to have two Blackfeet elders and storytellers visit and share Napi stories. The stories were full of important themes that students were able to connect to their own garden experiences. They reflected on the gifts they were given from the garden as well as the gifts they shared with the community. Generosity was a huge theme that the students discussed- by sharing, you welcome more people into your family, which is exactly how the Garden Harvest Feast felt. As for Hubbard, he was passed around the classroom and given one last blessing before the students harvested his seeds and cooked him in a squash pie. It was bittersweet to eat Hubbard, but the elders stressed that the nutrients that he gave us would give us the strength to plant even more delicious food and continue celebrating the cycles of life in the garden. After adding Hubbard’s seeds to our native seed bank, each student was given one to take home and plant in the community in the spring once the snow melts. Polson students can’t wait for next fall, when their tables (and bellies) will be full of the next generation of Hubbards!