Madyson Versteeg is a FoodCorps Service Member in Billings, MT. Billings, the largest city in Montana, has been my home for just under two months. I am still surprised by discovering a new café that uses local ingredients, by the rewarding interactions with numerous community members on a daily basis, and by the first snow on … Continued

By FoodCorps — October 18, 2012
Madyson Versteeg is a FoodCorps Service Member in Billings, MT.

Billings, the largest city in Montana, has been my home for just under two months. I am still surprised by discovering a new café that uses local ingredients, by the rewarding interactions with numerous community members on a daily basis, and by the first snow on the third day of October. Yes, you heard right. The forecast we had been obsessing over was spot on. I woke that Wednesday to a white flurry and a chill I hadn’t felt since last February.
The slanted golden sunlight and vivid orange pumpkins still on their vines conjure the essence of a typical October day, despite the blanket of snow that covered them and the garden only weeks before.  While the majority of plants in the garden have already died off, the bold, resilient Swiss Chard remains—a rainbow of bright stems framed by bright green. And the carrots, ever so tantalizingly sweeter, are still tucked away and protected in their earthen beds. Fortunately, we were able to harvest the remaining tomatoes and peppers before the frost and donate them to The Salvation Army’s Community Table program, which prepares and delivers around 500 meals daily to those in need. 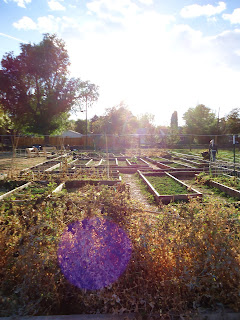 The Salvation Army of Billings, my FoodCorps service site for the year, along with the 1/3 acre community garden, has a newly planted orchard of 100 apple trees and a hydroponic growing space located within the Salvation Army thrift store. These projects have only come to fruition within the last three years, and are continuing to grow both in terms of production of food and in the number of involved community members. The ultimate vision behind these projects is to supply local and nutritious food to the Billings community year round as well as teach kids and adults the skills to grow their own food.  I have been co-teaching The Salvation Army’s free afterschool youth gardeners program, making me realize even more how meaningful it is to root these hands-on, educational lessons in a garden where students can engage all of their senses. 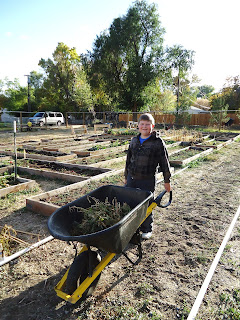 Today in garden program we would be saving seeds. The kids displayed keen interest in the concept, spouting remarks like, “So you can save any kind of seed? Can I save pepper seeds? Peppers are my favorite.” Or, “Why doesn’t everyone save seeds? This is more fun than planting!”  As we scooped out seeds from the sliced bell peppers, we discussed the incredible amount of pepper plants just one pepper could produce. The gleeful students proclaimed, “We’re going to have so many peppers, look at all of these seeds!  There must be thousands!” We also shelled beans and peas, carefully selecting the driest pods and stripping away the yellowing shell to reveal bright white beans and wrinkled peas. An assembly line was formed under the direction of one student, and we each fastidiously performed our duties of sorting, smashing, and shelling legumes. 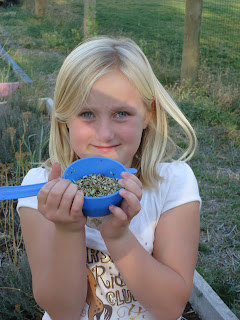 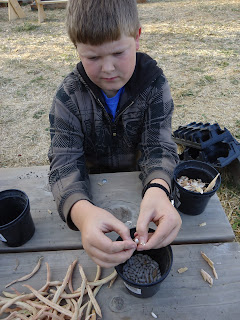 With the seeds, beans, and peas tucked safely away from the damp, cold fall day and produce chopped and frozen for later use, our days in the garden are coming to an end.  The few sunny days will still call us out for further exploration, despite the bleak landscape of empty garden boxes. Even though the change of the season brings snow and frost, it also shifts our mindsets to a new and critically important technique of growing. In the coming days, we will transition to grow lights and hydroponics, and students will watch water flow through the bare roots of lettuce instead of our resting winter soil.
Share