#TryThings: Happily Outside of the School Food Comfort Zone

“Nikki is a picky eater. I can’t get her to eat many things, especially healthy food,” Nikki’s mom explained to me. For a long time, I would have agreed to this assessment as I had experienced Nikki’s obstinance during class for months. She refused to try any fruits or other new dishes we made together … Continued

“Nikki is a picky eater. I can’t get her to eat many things, especially healthy food,” Nikki’s mom explained to me.

For a long time, I would have agreed to this assessment as I had experienced Nikki’s obstinance during class for months. She refused to try any fruits or other new dishes we made together in her kindergarten class with impressive conviction. I always inquired, “You’re not going to try the salad you just worked so hard on?” and “How do you know you don’t like it if you never have tried it,” to convince her to take just one taste of our nutritious creation. 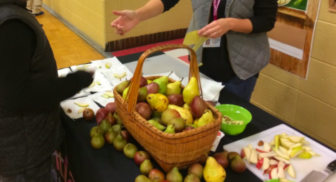 Then, during a taste test in the cafeteria on a random day, Nikki decided to step out of her comfort zone. We were sampling different types of pears, delicious varieties from Bartlet to Bosc. Nikki came by the table and I asked her if she would like a sample. She gave me the “I don’t want to try it but I don’t want to say no” face I often got from her. I picked up a smaller piece than the others: “please have a tiny piece, look, just try one tiny bite.” With a look of hesitation, she took the sample and scurried away. I waited in anticipation, feeling grateful that she took the pear if nothing else.

Minutes later, she came back to the taste test table with a giant grin on her face. “That apple was delicious,” she said with glee and enthusiasm! I laughed to myself and said 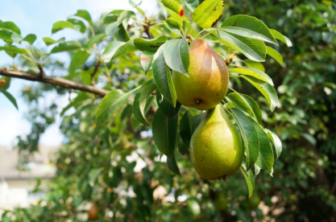 to her, “it’s not an apple, it’s a pear, but I understand why you would get them confused since they look and taste similar. Want some more?” Nikki answered with an exclamation of “YES!” and then skipped back to her table. For Nikki, after months of refusing to try new foods, that was a huge move out of her comfort zone. For me, it was a revelation. I can relate to Nikki in many ways: in a time when she is still exploring flavors and texture, the decision to #TryThings was daunting, which made the reward was so great. Since that time, Nikki has been more willing to try more foods. She has liked some and hated others, but the important point is that now she is at least making an attempt to try.

Just like Nikki, I too have been pushing my limits during my time as a FoodCorps service member. My service so far has been a conti 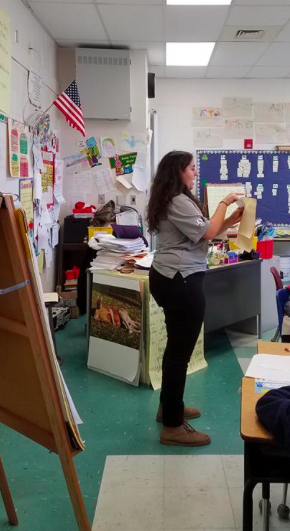 nuous series of stepstones out of my comfort zone. It was daunting to enter into FoodCorps service without extensive experience in the classroom, garden, or school lunch arena. However, just like Nikki experienced, there is enormous reward in trying new things and growing through discomfort. Through trial and error, lots of questions, hours of research, and support from FoodCorps and my service site, AtlantiCare, I have been able to push past my worries. I look back on myself six months ago and see how much I have grown in the areas of health, gardening, teaching, leadership, and cooking. I still have much more to learn but I am excited to see what I will uncover and experience during the rest of my service and beyond!