FoodCorps service members in California are engaging students in hands-on science and gardening lessons, teaching them about worms and compost. 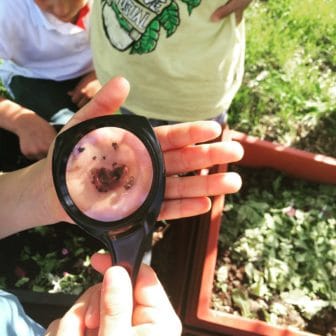 As any good science teacher knows, if you get the kids saying, “Ew!” you’ve definitely got their attention.

“Talking about worm poop always gets the ‘ews’ going,” says Jordyn Vitorno, one of a group of ten FoodCorps Service Members working within the 21 elementary schools of Oakland (Calif.) Unified School District (OUSD) to set up worm beds in learning gardens and integrate worm lessons into the curriculum for more than 7,000 students.

According to Vitorno, “a few brave souls got to hold the worms and eventually the majority of students worked up the courage to hold a worm or two!”

The lesson also teaches about sustainability. While regular composting is still the main way fresh food scraps are diverted in Oakland schools, worm composting—vermicomposting—isa living lesson in one of nature’s amazing life cycles.

In one class, students played a nutrient cycle card game with six picture cards: a person eating an apple, throwing the apple into compost, a worm eating the apple, the worm excreting compost (called worm casings) and the compost supplying nutrients for an apple tree to grow. To win the game, the cards end up in a circle.