iinníí: The Power of Tradition

At the turn of the 19th century, an estimated 60 million bison roamed freely throughout North America.  Bison were a primary food source for many Northern Plains Native Americans, including the Blackfoot Confederacy.  The precious animal, referred to as iinníí in the Blackfeet language, also allotted the Blackfeet people countless uses beyond nourishment.  Hides provided … Continued

At the turn of the 19th century, an estimated 60 million bison roamed freely throughout North America.  Bison were a primary food source for many Northern Plains Native Americans, including the Blackfoot Confederacy.  The precious animal, referred to as iinníí in the Blackfeet language, also allotted the Blackfeet people countless uses beyond nourishment.  Hides provided shelter and warmth for tipis, fat was rendered to make soap.  Bones were carved into tools and stomach contents dried out to create fuel for fires. This mighty and abundant animal embodied tradition, sacredness, and the deep respect the Blackfeet had for their land and all forms of life it supported. A century later in 1900, the estimated number of bison in North America was 300.

As I was wrapping up a cooking lesson one Wednesday afternoon with the Blackfeet Junior Academy, the alternative education program at Browning Middle School, Mr. Suttle said, “we have a few minutes left, let’s set up some boundaries for our field trip tomorrow.” I curiously asked him where they were going.

“To a tribal owned buffalo ranch to kill and clean a bison.  Would you like to join?”

Before he could finish the sentence I was emailing teachers, rescheduling lessons for the following day to accompany the class for a once in a lifetime experience.

The yellow bus stuck out amidst the freshly snow-coated plains just south of town, as we drove thirty minutes to the AMS Ranch.  Luckily for us, the infamous prairie winds held off for the day.  Solely breaking the silence was an adjacent coulee, not yet frozen from the encroaching winter.  About 20 students waited patiently for our host to arrive.  The boys wrestled to the cold ground, the girls joked while staring intently at the bison herd; 70 massive heads curiously gazing back.  Our host arrived and the hunt quickly began.  One of the students, who had experience with big game hunting, was chosen to shoot the bison.  He rode in the pickup about 100 yards out to the herd, steadied against the driver’s door, and the gunfire echoed across the silent plains.  A clean shot. 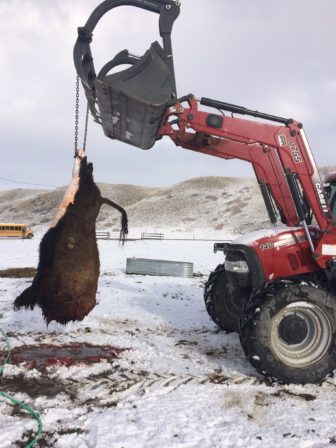 We approached the fallen animal, twitching out final traces of life, as our host said a small prayer for its’ honorable sacrifice. Steam rose from the snow melting red. After removing the head, they wasted no time in chaining up the remains to a tractor and brought it to a cleaning area to resume the sacred practice. What followed was a quick and efficient blur of bloodied hands, knives, and a whole mass of animal to work with.  The students were impressively respectful and cautious during this process. They showed leadership, teamwork, and a genuine grace performing a ritual that many would find almost too graphic to witness.

After the innards were removed, we stopped a moment to take part in the tradition of eating small pieces of the still-warm kidney, which was presented as a toast of good health to our friends and loved ones. After, some were assigned tasks of cleaning out the remaining organs, while another group of students started peeling the hide from the carcass.  When all was said and done, the skinned body was loaded in the pickup to be quickly transported and processed in a town about 150 miles southwest of Browning.

We loaded the hide, skull, hooves, and most of the organs back onto the school bus (a sentence I never thought I would write), and were ready to head back to town.  All that remained in the space where the giant animal previously laid was blood and contents of the stomach, everything else being put to use.

By the year 2000, the estimated number of bison in North America was back up to around 360,000 thanks to various efforts made by both tribal and non-tribal organizations.  At the AMS Ranch, the caretaker will gift bison meat to any tribal member who is clean and sober.  An attempt to reintroduce a healthy staple of the traditional Blackfeet diet back into a hunger-stricken community, while advocating for a drug-free reservation. In the weeks following this trip, the students were able to cook the bison liver, kidney, and tripe in both traditional and modern preparation. 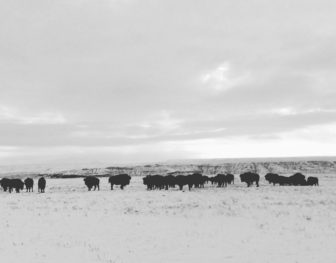 This experience is a powerful representation of how food is fundamentally intertwined with culture, an instrumental piece of the placed-based model that FoodCorps emphasizes. Since the Blackfeet were never agriculturally rooted, this trip has intrinsic value for the students, unequivocal to planting seeds and harvesting vegetables. I feel an overwhelming sense of gratitude for being able to witness and share these moments with the Blackfeet Junior Academy, and I profoundly commend all people working to reinvigorate tradition and heritage across the contemporary landscape of Native Peoples.

On our way back to Browning, we stopped at the Holy Family Mission to eat lunch.  In some ways, the Mission represents one of many institutions that attempted to erase culture, tradition, and language from the Blackfeet people.  As we stood in the shadow of the church sharing a meal, Mr. Suttle announced that it was a celebratory occasion. “We’re celebrating the fact that their erasure didn’t work.  A Blackfeet kid killed a bison today, and he won’t be the last one to do it.”  Here’s to the tradition of the iinníí living on.