This February, Pueblo Gardens K-8 in South Tucson was proud to serve student-harvested school garden produce on the cafeteria lunch line for the very first time.  With spring planting just around the corner and the school garden full of winter greens, I knew something drastic needed to be done. As the FoodCorps service member at … Continued

This February, Pueblo Gardens K-8 in South Tucson was proud to serve student-harvested school garden produce on the cafeteria lunch line for the very first time.  With spring planting just around the corner and the school garden full of winter greens, I knew something drastic needed to be done. As the FoodCorps service member at Pueblo Gardens, I am responsible not only for bringing kids into the garden for hands-on lessons, but also for figuring out how to use that garden produce in the best way possible.  At first I was going to coordinate several cooking demonstrations for the upcoming weeks to deplete the jungle overgrowth of kale, chard, and lettuces that the hard work of my students had produced. Luckily, Mrs. Johnson, one of the teachers and garden champions at Pueblo Gardens, conscious of our recent certification to serve garden produce in the cafeteria, had the idea to share all the extra produce with the school in a special cafeteria event. 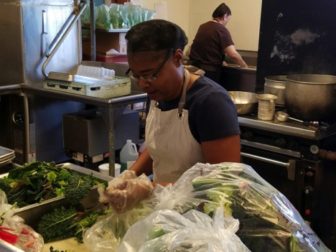 What a great idea to take advantage of our new certification! And a big accomplishment to be able to pull something like this off. As of fall 2016, Pueblo Gardens was certified by the University of Arizona and The Arizona Department of Health Services (ADHS)School Garden Food Safety Program. Why is this so exciting? For many schools across the country, food safety regulations can prevent student-grown produce from making its way into school meals. Pueblo Gardens school community  was determined to have their students be able to participate in the full cycle of farm to school so that they could eat and enjoy the healthy food they helped grow in the garden. They committed to a robust food safety and good agriculture practices (GAP) plan for student grown produce to be served on the cafeteria line for school wide access and consumption.

This intense plan ensures that the school produce is grown, harvested and prepared in clean conditions for the school community, including students, teachers and parents. Once the school creates and implements their food safety plan for the school garden, they receive an inspection from the ADHS to then receive their certification. 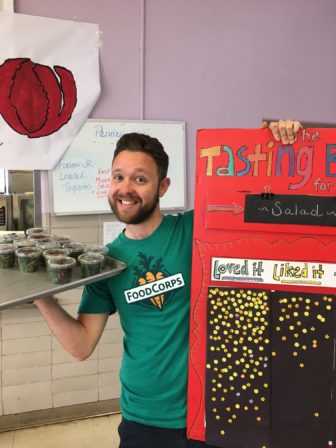 We were set to go. I teamed up with the school district chef and harvested 32lbs of produce a couple days before the event. We know that marketing is a big piece of getting kids excited to eat healthy food. So we placed posters around the cafeteria and  strung banners over the cafeteria window. Then we filled the cups of mixed greens and placed them on the lunch line. It was a colorful mix of carrot, red cabbage, arugula, lettuces, kales, and rainbow chard in a vinaigrette dressing, topped with a mandarin orange slice.

The students overwhelmingly “loved it!” The 32lbs of salad lasted two days on the lunch line for all Pueblo Gardens students from kindergarten to eighth grade. All students who tried the garden produce were given a sticker and told to vote on how they felt about it.  They had the choice to vote whether they loved, liked or just tried their garden produce. Providing students the opportunity to give input gives them agency and further investment in their school garden. The cafeteria staff were thrilled to see the students they serve  every day so excited about fresh vegetables and are inclined to do another garden to cafeteria event because of how many kids “loved it!”.

The very next day, the students had another first learning and celebrated the lunar new year. I tried to sell the kids on the idea that I was unable to be in class but instead had asked my good friend, which later became my identical twin, Dr. B to help them learn about dumplings through dissection. 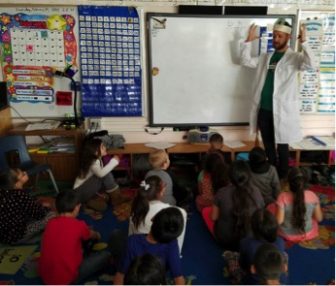 This strategy proved unsuccessful and the kids knew it was me in costume because I was “wearing the same shoes as Mr. B.” Next time I’ll be sure to bring a change of shoes to complete the illusion so that the kids won’t know it’s me. In either case, the students were introduced to the scientific method. They formed hypotheses about what the dumpling were made of and filled with, dissected the dumplings, sorted the contents while making observations, and finally delivered their conclusions with a surprising level of accuracy. 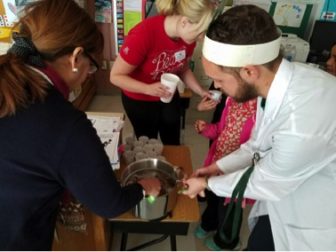 I was also fortunate enough to recruit students from the Chinese student Association from the University of Arizona to come in and share their experiences celebrating the lunar new year. The stories they told were invaluable in helping the students connect with and understand Chinese cultural traditions celebrating the lunar new year.The students ended the lesson by displaying their artwork, trying a cooked dumpling, and sampling some jasmine green tea. 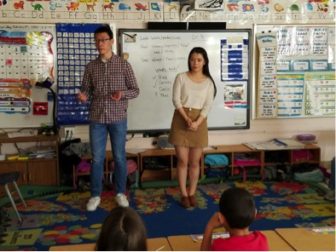 Brandon Wallace is a FoodCorps Service Member with the Community Food Bank of Southern Arizona. On a weekly basis, Brandon provides hands-on school, school garden, nutrition and cooking education to students at both Pueblo Gardens and Mission View Elementary in South Tucson. Brandon has committed to FoodCorps mission, to connect kids to healthy food in school, because of his passion for nutrition education. Brandon is currently on track to become a dietician and is originally from Albuquerque, New Mexico, frequently cooking with green chile that he drives to pick up in Hatch, NM.