Racism in School Food — And What We Can Do About It

Here’s how systemic racism and classism have shaped school food — and how activists are rising up for a new school food system. 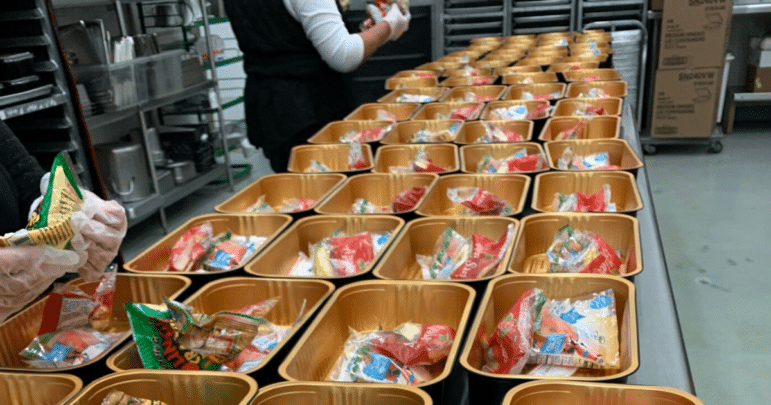 In the United States, more than 30 million kids rely on school meals for their daily nourishment. And school breakfasts, lunches, snacks, and even suppers have nourished kids’ minds and bodies for more than a century.

But in its early iterations, our school food system wasn’t designed to serve every kid equally. Systemic racism and classism have shaped almost every aspect of school food, from the kitchen where it’s cooked to the food on the plate.

Racism in school food dates back to the origins of the United States, when colonizers stripped Indigenous peoples of their lands, cultures, and foodways. Indigenous children were forced to attend schools with white children and prohibited from speaking their original languages or eating foods native to their cultures.

Some Boston high schools started providing school lunches in 1894, an attempt at “providing nutritionally sound meals and low prices to children who would not normally have them.” Public schools in other cities began rolling out lunch programs by the 1900s, with typical meals being meat, stew, or potatoes — an attempt at assimilating non-American children.

“Calls to Americanize the foreign-born reverberated through government offices,” according to Jane Ziegelman’s 97 Orchard: An Edible History of Five Immigrant Families in One New York Tenement. “The Board of Education looked to the school lunchroom to Americanize the immigrant palate.”

After the abolition of slavery, the racist policies of the Jim Crow era shaped how kids went to school. You likely remember from history class that Black and white students attended segregated schools until 1954, when the landmark Brown v. Board of Education decision struck down the segregation of public schools as unconstitutional. But by then, the practice of redlining had already locked many families of color into segregated neighborhoods, discouraging businesses from serving Black communities — and limiting Black families’ access to grocery stores, healthy foods, and nutritious school meals.

“The Board of Education looked to the school lunchroom to Americanize the immigrant palate.” —97 Orchard: An Edible History of Five Immigrant Families in One New York Tenement

After passing the National School Lunch Act of 1946, Congress stopped paying for school cafeteria equipment, leaving school districts to fend for themselves to upgrade their cooking, prep, and storage facilities. Shortly after, “white flight” — a departure of wealthy white people from cities — caused property values in urban centers to plummet. Schools rely on property taxes for funding, and without that funding, schools in increasingly low-income communities of color lacked the budgets to invest in adequate kitchens.

When Congress passed the first child nutrition bill in 1963, schools could only get funding for school lunches if their kitchens were well-equipped. Because schools in Black communities had already lost so much funding, their kitchens were less likely to meet the requirements and miss out on the opportunity for funding.

For decades, communities of color, as well as poor rural communities, have been left out of federal policies that would support local infrastructure, small farms, and regional economies. Today, these areas have some of the highest rates of child hunger.

And in 2021, the grueling COVID-19 pandemic has had profound impacts on food insecurity. Kids in nearly 1 in 5 households are not getting enough to eat. Between health disparities faced by communities of color, the pandemic’s economic impacts, and anti-Asian racism in the face of the virus, families of color are bearing the worst of this crisis.

Despite generations of racist and classist policies, communities of color have risen up against injustices to help shape a food system that can serve all kids.

The Black Panther Party fed tens of thousands of children in at least 45 programs across the country, often feeding thousands of kids per day. Using the Black Panthers’ program as a model, Asian American activists organized similar initiatives to feed kids and invest in their own communities, mobilizing in Little Tokyos, Chinatowns, and Manilatowns across the country.

The FBI made repeated attempts to shut down the Black Panthers’ program. FBI agents lied to parents about the safety of the food being served, for example, and some even broke into churches to destroy food meant for students. The FBI eventually shut down the Black Panthers’ initiative, but the free breakfast program did inspire the federally-funded School Breakfast Program that still operates today.

In recent years, school nutrition directors—the people in charge of making decisions about school food—have fought for better kitchen equipment, connections to local farmers, and access to fresh, culturally relevant foods. Their innovation and creativity has led to meals that are delicious, reflective of students’ cultures and backgrounds, and healthier for kids and the environment.

In 2010, Congress passed the Healthy, Hunger-Free Kids Act with bipartisan support. This legislation required schools to serve more nutritious meals in order to combat what was being referred to as the “childhood obesity epidemic.” School nutrition programs leveraged this opportunity to serve nutritious foods with local ingredients, a way to support local farms and economies while serving kids the very best.

Where we go from here

It takes a combination of people and policies to ensure our school food system lives up to its potential.

One tool for advancing equity in school food is food education. When dedicated food educators are given the time, space, and resources to teach kids about growing, cooking, and eating nourishing food, students are able to build connections to their food system, learn why nutritious food is important, and move toward playing a role in their own food sovereignty.

At FoodCorps, we’re advocating for — and helped to create — the Food and Nutrition Education in Schools Act. Building on evidence that hands-on food lessons help kids develop positive relationships with healthy food, this bill would create pathways to place more food and nutrition educators in public schools.

“School meals should be recognized as an incentive for coming to school, and what coming to school means for building community.” —Elizabeth Marchetta, Executive Director of Food and Nutrition Services for Baltimore City Public Schools

“I’ve always said that when it comes to shaping kids’ health behaviors, cafeteria managers are more powerful than pediatricians,” Elizabeth Marchetta, Executive Director of Food and Nutrition Services for Baltimore City Public Schools, told FoodCorps last year. “School meals should be recognized as an incentive for coming to school, and what coming to school means for building community.”

Additionally, child nutrition laws have not been updated — a process called child nutrition reauthorization, or CNR — in ten years. The next CNR process could incorporate a number of measures that seek to further equity in school nutrition, including legislation to upgrade school kitchens, increase farm to school practices, and get more local food on kids’ plates.

It’s on all of us to ensure that our school food system provides all kids with positive, joyful connections to nutritious food. We hope you’ll join us.